With 25 years’ experience as a primary teacher and Local Authority Adviser, I am also an accredited assessor for both the ICT Mark and 360 Degree Safe and a Naace Delivery Partner. I am always happy to have a chat, either through email or telephone, so if you want to discuss any issues or requests then please do get in touch. Use the contact form and I will get straight back to you. Alternately drop me an email at sally@sallytippett.co.uk or call me or text on 07870694886 You can also find out more by visiting the home webpage at Sally Tippett

The transcript of Sean Harford’s speech reflecting on Ofsted’s work and the future of education inspection is now available to read – joy!

Apparently we have a lot to be optimistic about, despite the difficulties our education system in England still faces.  Schools are improving at a faster rate and more young people are going to university.  He acknowledged that the optimism of many headteachers will sometimes be put under strain when difficult decisions have to be make – often on a daily basis.  Also acknowledged was that the difficulties faced by schools and school leaders were sometimes compounded by the seemingly constant state of change and upheaval in the education system.

In his speech, he referred to the fact that headship is a great job, but also a tough one, hard and often lonely – in fact, it bears some strong parallels to the job of an Ofsted inspector – does it?

Of course, changes are afoot and he referred to these in the speech.  From September this year, a new ‘common inspection framework‘ will be introduced with a single set of overarching areas for judgement.  There will be a change in the way good schools and colleges are inspected – frequent but shorter inspections.  In short, three key factors will determine whether a school remains good, each of these will be firmly centred on leadership:

During April and May there will be further pilot inspections to test the Common Inspection Framework and short inspections and in June there will be a launch of the inspection materials and 8 regional conferences to help providers and inspectors get ready for inspection arrangements in September 2015.  Although when I checked the dates and the booking information for these, all places for schools were sold out!  I am waiting to see if any further dates are to be put on. 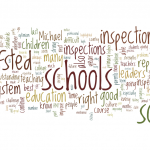 You can read the full speech here